Alarm capacitive sensor based on transients in RC-circuits

Annotation: The operation principle of the capacitive sensor, which was originally developed for use in the alarm security systems, is described. But it can also be used as a proximity sensor in production in automation systems to inform the control device or operator of the approach to the sensor sensitive surface. The operation principle of the device is based on measuring the difference in charge currents of the capacitance of the reference capacitor and the capacitance formed by the sensitive sensor surface and the external object as well as for other applications related to the measurement of electrical capacitance. The main advantage of the proposed solution is a significant reduction in the effect of parasitic leakage currents arising in the sensor capacitance under the influence of contaminants and changes in the humidity of the environment. In addition, by changing the capacitance of the reference capacitor, the capacitance of the sensor can be varied in a very wide range, from picofarad units to fractions of microfarads. Hence, when using this sensor, its sensitive surface can be both a conductive surface (grid, plate, etc.) with an area from several square centimeters to tens of square meters, and a wire that length can be varied from a few centimeters to hundreds of meters. And this sensor does not require the use of special means to ensure a high degree of isolation of the sensor's sensitive surface from the environment. 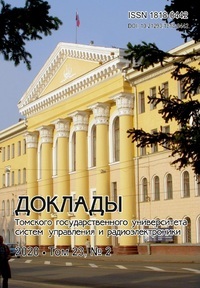 Executive Secretary of the Editor’s Office